The client is king. This is also the belief of engineering company transfluid, based in Schmallenberg. Customers often request tube processing machines with specifications that are particularly challenging. And every time, the experienced engineers at transfluid will work hard to find the best possible solution.
A very good example is a real project transfluid has worked on, requiring the production of a stainless steel manifold with a very complex shape, which needed complicated bending, forming and calibration of the ends. This was the specific challenge: to only manufacture the tubes needed for one manifold, so that the client can take four or six pieces to get always one manifold in the welding process, even for the large-scale production. The result: when on single tube fails in the automated welding unit it can be further processed, the cell gets a signal and produce one single tube extra. That´s one-piece flow.
Ready for all requirements
The individual requirements of the customer also included the production of a sequence of at least four tubes that were not same, without pre-cutting the tubes. The automated cell included a loading magazine for long tubes, a device for the orientation of the weld seam, a bending machine with five bending levels and capable of cutting the finished component, when the bending process is complete. In addition to this, the components were calibrated both internally and externally at the same time with a finger expansion. The final complex bending shape was put in an axial combination machine at the end to finalise the endforming of the opposite end. This machine can perform the final exact cut in an orbital and chipless way. This makes it possible to reshape the tube axially with one clamping process.
Clean cuts for precise solutions
The loading magazine can take a whole bundle of tube in one go. The tubes are then separated by using eddy current seam detection to recognize the welding seam. The welding seam is positioned and the tube is fed to the bending machine with a linear handling system. As these components are very compact, it is possible to produce up to 20 units from one tube. There are up to four bending levels plus one cutting level available to bend the individual components.
After the bending part of the process, the tube is cut in a controlled manner with long-lasting carbide blades. Result: A clean cut and a component with a perfectly round tube end.
A robot takes the tube and uses an expander to calibrate the tube. This is necessary, because the cut on the tube is finally very close to the bend. With this last step the processing of side on the component is complete and it is placed in the deburring device to obtain a smooth cut. After the deburring a robot takes the component to a combination forming machine for further processing on the opposite tube end. A Robot move the tube in compound clamps to the combination machine for forming, calibration, trimming in a chipless orbital method and an axial forming an asymmetric geometrie in three steps, with very tight tolerances and complex results.
The asymmetrical and very challenging forming is not a problem for the expert engineers at transfluid. Because the forming of the tube ends depends on the tube processing, the forming is done with so-called “additional clamping technique”, to reduce the amount of tools.
The established rolling technique gives professional results
At this point a robot will place the four different components in separate containers. A separate unit will manufacture an EGR tube in parallel with complex 28x1 bend geometries. A flange with a 45 mm diameter has to be formed on this tube. During this process the longitudinal seam should not be damaged and the flare should not split. To complete this delicate step transfluid puts into operation their established rolling technique. With this technique it is possible to form tubes that have already been bent and have a very short clamping section.
News images 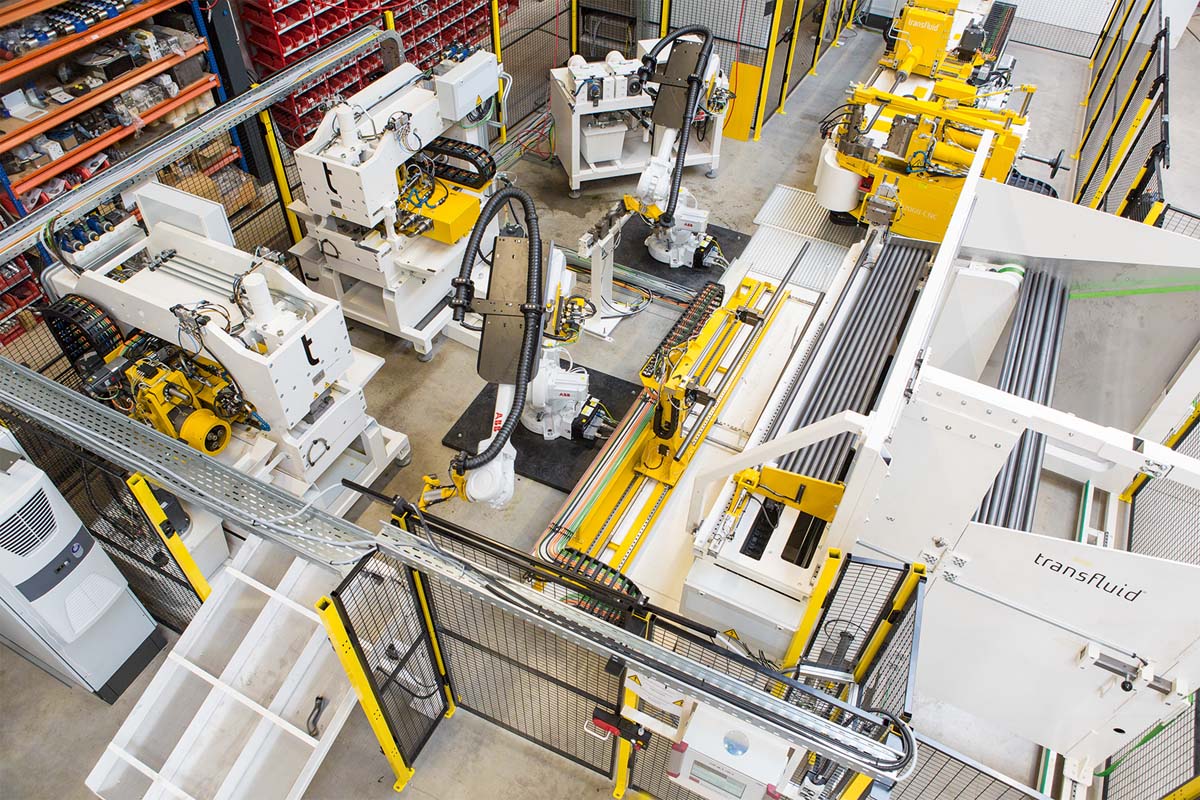